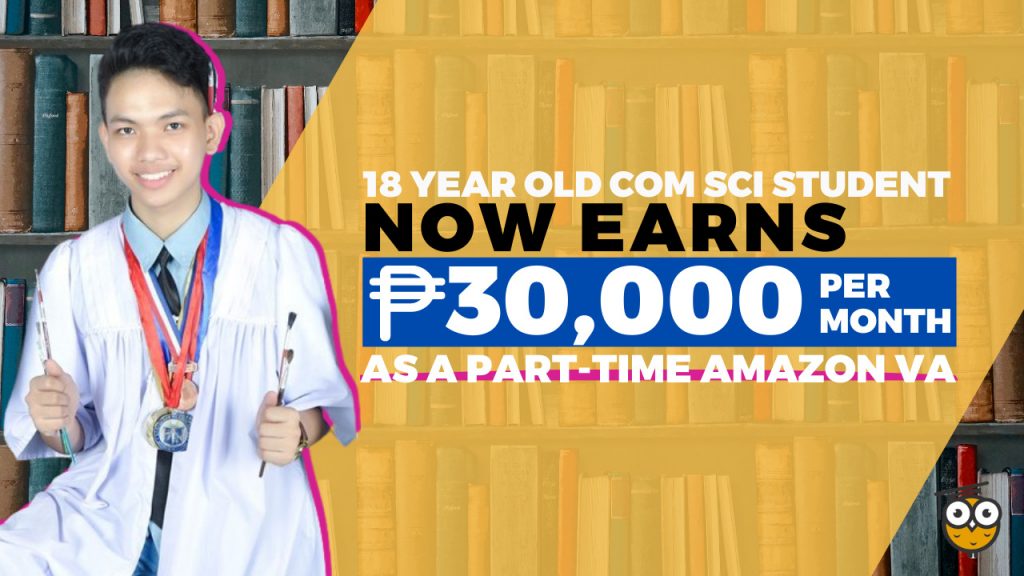 As a Computer Science Freshman who wanted to get more out of his free time during the pandemic. He felt like he had a large amount of valuable time that he could maximize to become more productive. Starting with a clean slate but with an open mind and heart. He took shots while watching videos about online jobs popping out at Youtube. Clueless of what he was getting into, he persisted with the high hopes of finding the golden opportunity. Little did he know that he was already on the right track.

School was out for too long already. He was becoming restless wanting to do more out of his free time. Boredom was starting to creep. With the routine of just playing online games, something just had to be done. He needed an upgrade. Fortunately, his desire to learn more coupled with his youthful curiosity led him to find videos that featured the inspiring success stories Faye and Michaelangelo who made it as Amazon Virtual Assistants.

An Artist With an Entrepreneurial Mindset

As early as first year in highschool, he was already an artist nurturing an entrepreneurial mindset.

At a very young age, he already had it in him. He was earning at least P300 per artwork with a whopping P4,000 award he received from a contest as the highest. He knew how to earn using his talent and skills. He must have wanted to build a career out of it.

While exploring opportunities online, he never knew that there was an Amazon Sellers Virtual Assistants Master Class available. He checked out the links attached to the description of the video posted by Amazonationph.com and saw the benefits of becoming an Amazon Virtual Assistant.

After seeing the awesome benefits that were in store for him, he made the first move and ASVA was there to catch him. His heart leapt with joy when he found out that there was a community of Amazon virtual assistants where he could actually relate with. These awesome benefits were attractive but the active community of ASVAs sealed the deal for him to enroll.

His determination and conviction to join the ASVA community was all set. The only thing that was left to figure out was how he was going to get the enrollment fee. Unbelievably, he was still actively earning by competing in art contests online. And as fortune favors the bold, with his extreme desire to enroll, he grabbed the opportunity to create an education material at Tiktok. With his undeniable talent put into action, he won 2nd place and received P5,000 cash even with the pressure of having limited time during that time as the enrollment phase was about to end.

Blessed with supportive siblings who saw his intense desire to find an avenue where he would earn a living out of his artistic passion, he finally was able to get himself enough cash to enroll. (His siblings must have thought that this is a way out of their younger brother from the pit of getting addicted to online games)

Prioritize and Be Consistent

With a strong sense of responsibility, CJ needed to make sure that he could really take advantage of the ASVA Masterclass without having to sacrifice anything in his studies. So he made commitments and stuck with it, a quality decision that could have actually made all the difference.

It was clear to him that learning was all the same for him, no matter what subject it was, it was all about being committed to learning something new that was important.

He Made Use of His Existing Portfolio in Applying But…

His training with ASVA started January 2020 but with the use of his portfolio, he had already begun applying as early as February that year. He got invited for an interview with a prospect client. He was ecstatic in the moment thinking that he was already about to get on-board with a client. But he learned the hard way, he had the tenacity to work but he still lacked the technical background that was yet to be imparted to him by the Amazon Sellers Virtual Assistant Master Class.

He was convinced that by the end of the Finals term, the clients will begin to sprout. So he made sure to accomplish everything needed at school before the end of February.

Eventually, after all the consistency and dedication, things seemed to have fallen into perfect place for our youngest champion in the making!

It All Goes Down to Character

There were many times when CJ was presented with a lot of reasons to give up on his dream to earn more out of his passion. But he made use of his greatest resource and that was the quality person that he was. When he was asked if age or degree was a priority during his interview with his client.

Dedication to delivering the results is key. Clients value the kind of person they are working with. Clearly, CJ hit the spot on what mattered the most to his clients.

“The only person who is responsible for ourselves is ourselves. –Cj Casinsinan”

He transformed his spending time into earning time. Thus he was rewarded with a newfound promise of a career naturally opening a whole new world of golden opportunities. As a part-time Amazon VA, he is now earning P28,000 – P30,000/month. But wait, there’s more. While CJ is earning that much, he not only continues to study but he was among the President’s list in the university he is currently studying in.

You too want to make a career out of your passion. Or perhaps, keep your day job while earning through your passion. You’ve got to start somewhere. Ask yourself this very important question, “Where is the best place to start?”

A message from CJ: Be a dreamer, and a doer!