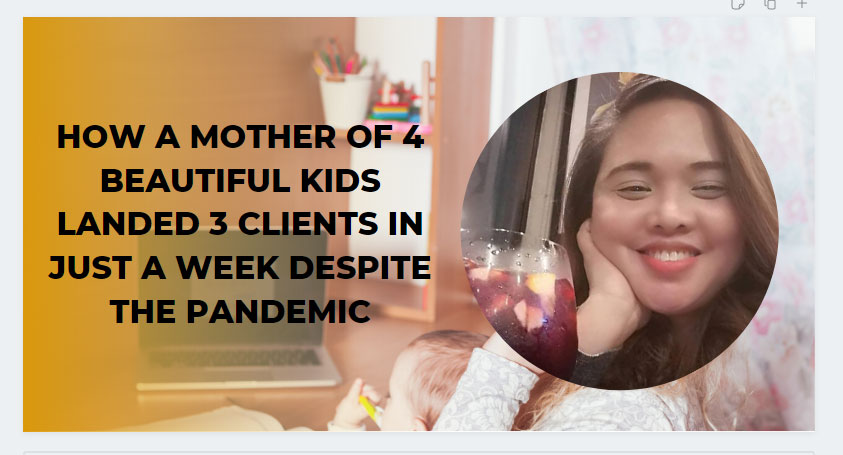 The recent economic shutdown due to COVID affected several companies causing millions of Filipinos to lose their jobs. In fact, the unemployment rate was at its record high at 17.7% last Apri 2020.

With mouths to feed and bills to pay, many Filipinos have started exploring how they can earn a living working online.

I’m sure many are having second thoughts if there are still opportunities online.

Is it really possible to get a client amidst the pandemic?

Instead of answering that question, I’d like you to meet Irene.

Although she was passionate about her job, her love for her children is even greater.

She wanted to be present during her kids’ formative years.

But that wouldn’t be possible if she kept working in the BPO industry.

In 2013, Irene took a 180-degree turn in her career and decided to enter the remote staffing industry.

She confessed that it was easy back then since the opportunities were quite scarce.

“During that time, I was trying to bring into the table my customer service skills trying to find jobs…[and] during that time kasi sobrang limited pa yung platform at wala pang masyadong clients sa Facebook”

Despite the challenges, Irene didn’t give up and finally got her first client in the real estate industry.

She handled several clients one after the other.

In that same year, she landed a client in the eCommerce niche. The business grew and Irene was even promoted as the Operations Manager.

Everything felt like a dream until it turned into a nightmare.

“Lumaki yung group and naging Operations Manager ako… Feeling ko this is it na…and then nagkaron ng issues with the client.”

By that time, there was a sudden surge of freelancers which made the struggle harder.

The competition got tighter and tougher since many had the same skill set offering the same service.

“That time, the struggle was. I have this already – my customer service skills. So, what I have to offer pa?”

This pushed Irene to look for ways she can upgrade her skills and offer more value.

She was convinced that having a ‘specialty’ will help her charge premium fees to her clients.

That’s when she found out about Lish Aquino’s Amazon Seller Virtual Assistant Course also known as the ASVA Masterclass.

However, she couldn’t afford the tuition fee at that time. After two more batches, Irene finally enrolled in the course with the help of her client.

She loved that the program can be consumed at your own pace. They had weekly meetings where they can ask questions and discuss with her classmates.

The best part was she could easily apply her learnings to her client’s business.

But just when things started to pick up, another wave of misfortunes came

Irene’s client who’s based in Australia decided to move to the US in January of this year.

They were told that business will resume after two months while her client was waiting for the dust to settle.

But things took a different turn by March when COVID became full-blown.

As if things weren’t bad enough, Irene had to face another major hurdle.

While at the hospital, she kept hustling.. accepting a few short-term gigs doing social media management and a bit of listing optimization.

And come April, her son was finally allowed to go home.

It was also during this time that she came to realize that her client won’t be coming back for her.

Clueless and confused, Irene took a month-long break to think through her goals and her next plan of action.

Then she received a notification…

Although she enrolled in the course in 2018, old batches are still given access to new tutorial videos and content.

She fell hard but came back stronger

Irene found herself going through the masterclass’ new videos to update her know-how skills.

She then implemented one of the advice mentioned there and optimized her social media accounts.

By the end of May, she joined Facebook groups and pages where Amazon sellers hang out, commented on posts, and answered questions from members.

She also added and reached out to qualified prospects.

“Kahit di ko kakilala, inadd ko. Nagsend lang ako ng…Hey, message of safety and health to you as well as your family. By the way, if you need someone who can give you a hand in your eCommerce business focusing on customer service, product listing…feel free to message me and I’ll be happy to jump in for a quick chat.”

Hard work soon paid off and inquiries started coming in.

Her first week of June became fully-booked with appointments.

The first client she hopped on a call with was into pet accessories and needed help with their inventory and product listings.

“Right after the call, he says he loves me and then it’s a premium pay agad, flexi tapos walang full time.”

Irene shared that she attended 11 interviews.

Her second client was also an Amazon seller looking for a virtual assistant who will focus on customer service.

The last one owns an SEO Agency that builds banner ads for Amazon sellers and was looking for a project manager.

One of Irene’s goals is to become a high-level virtual assistant or online business manager.

So without thinking twice, she also said ‘YES” to the offer.

Before the second week of June came in, she was able to close 3 clients!

“And it all boils down into because I went back to the course that I actually purchased almost 2 years ago. Kasi batch 4 ako eh and that [course] was upgraded, ni-relearn mo lahat ng meron ka ”

And with all that’s happening now, it just strengthened Irene’s belief that eCommerce is one of the most pandemic-proof business.

Come to think of it, many companies are pivoting to offering their products and services online. People would rather buy on the internet than go out there and risk contracting the virus.

Even Irene and her sister joined the bandwagon and started their own online business.

In the near future, she wants to open her Amazon store as well if everything pans out.

Right now, you might be thinking that Irene already have experience working with clients online that’s why she made it.

But here’s what she wants you to hear…

“There are people who’s not equipped… or doesn’t have the resources but they need to hear that the opportunities are there. You just have really be self-reliant and open to the resources that’s being offered online and try to feel if it’s a fit. If it’s something you would love doing.”

If you’ve been knocked down by the recent events, and you’re lost trying to put yourself back together…

Just take a step back and find your biggest WHY to keep you going.

Because truth be told,

With all the resources available within our reach…

It’s not really a matter if you’ll make it or not as an Amazon VA.

It’s only a matter of WHEN it will happen.

Curious to know if becoming an Amazon Seller Virtual Assistant is for you?

Then I have something for you…